Cooking with Mark Bittman
So this week it’s the Rice and Grains chapter in The Food Matters Cook Book.  Last week was my introduction to bulgur in a chickpea and chicken recipe, so thought I’d venture further into the great grain adventure.  After reading the introductory material in the chapter and most of the recipes (drool…..), I made a trip to Fresh Market and stocked up on ingredients like Quinoa (pronounced keen’-wah or alternatively, kee-noh’uh – I had to look it up) sunflower seeds, unsweetened coconut, chipotle chiles in adobo sauce, rolled oats, etc.

I started out the day Tuesday making Mark’s Granola.  It is a thing of beauty and deliciousness and, in spite of no added fat, calories.  I tell myself that they’re healthy calories.  For dinner the same day, I made Chipotle Quinoa with Corn and Black Beans.  This was my first exposure to quinoa and the first time I’ve cooked with chipotle chiles.   It will not be the last!  This is a hearty vegetarian – vegan, even – dish and is filling and very flavorful.  The quinoa has a slightly nutty texture.  I’m a bit of a chicken when it comes to hot peppers, so I used the canned chiles but omitted the adobo sauce, which is very hot.  Next time, I’ll use some of the sauce.  There was some heat from the chiles, but the smoky flavor is fabulous and more heat would add even more flavor, I think.  I have the ingredients for several more dishes from the chapter and can’t wait to try them.

"I cannot live without books."

On a dreary winter day it’s nice to remember the adventures of autumn.  Last October my friend Corinne and I visited Washington, DC.  We drove out and stopped in Charlottesville, VA, on the way to see the University of Virginia and Monticello.  Both were intriguing and a great warm-up for a visit to our nation’s capital.  Is it a coincidence that this is the mug I’m drinking from this morning?  I don’t think so. If you’re interested in seeing pictures of our trip, here’s a link.

The highlight of the trip for me, however, was our visit to the Library of Congress.  For a a hard core, card-carrying bibliophile, it was a trip to heaven.  First of all, the place is a temple to learning. 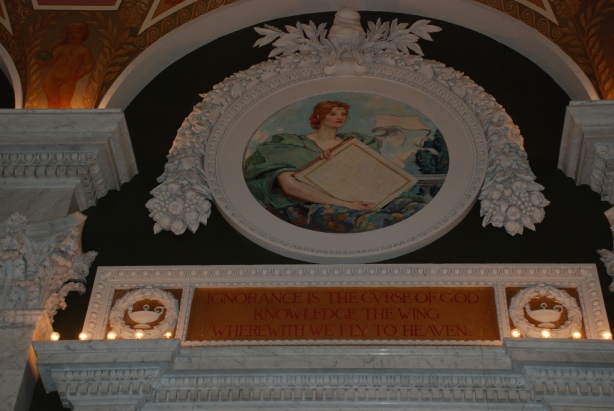 Also, it is filled with art and is an architectural feast.

We lucked out because we were there on Columbus Day and in honor of the national holiday the Reading Room was open for visitors.  Employees of the LOC were on hand to answer questions and (joy!) photography was allowed. 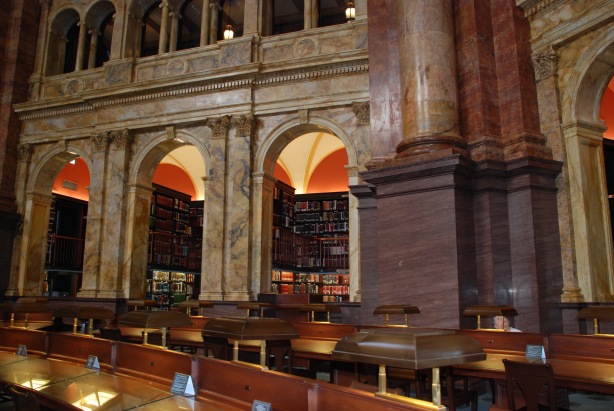 Usually visiting the Reading Room requires a research pass and only quiet study is allowed – and no photography.  In addition, access was allowed to the card catalog room – a huge vault with drawer after drawer of entries.  Of course, I’m sure the catalog of holdings is largely digitized now, but for someone who well remembers using a card catalog to find books, seeing this vast collection was thrilling. 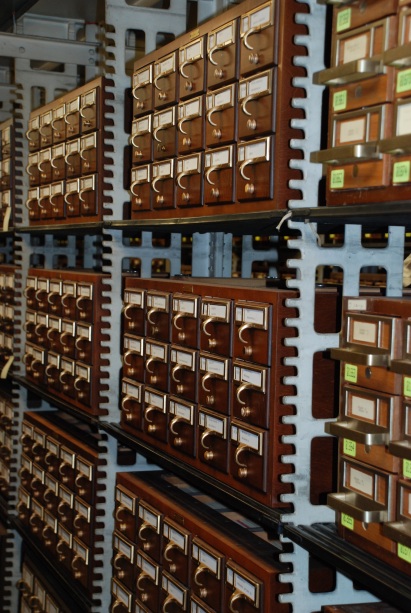 I mentioned in my earlier post that I’d made a pot of chickpeas and used some in Mark Bittman’s Curried Chickpeas and Cauliflower with Chicken – delicious!  So continuing the week of using the chickpeas in his recipes, I also made Chickpea Tagine with Chicken and Bulgur, which I shared with five of the Gang of Six.  Let’s just say that there wasn’t a grain of bulgur or a stray chickpea to left in the pot at the end of the meal.  I could make it again right now and eat the whole thing myself, I think.  The next day, I used the remaining chickpeas and their broth to make Creamy Carrot and Chickpea Soup.

I had it for dinner one night and for lunch the next two days.  Both dishes are full of wonderful spices.   Furthermore, they’re from MB, so they’re healthy, right?

I LOVE Mark Bittman month!  Excuse me, I need to go read the cookbook to figure out what to make next.  The month is young. 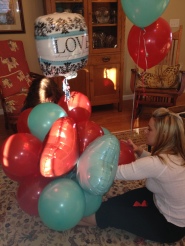 In fact, here’s a picture of Amanda and Anne as they spent a couple of hours detangling balloons whose ribbons had thoroughly embraced one another on the ride home in Amanda’s SUV. They were determined to do it without cutting the ribbons.  At the end of the game, balloons one, women zero.

So, how about a little before and after perspective on the honorees? 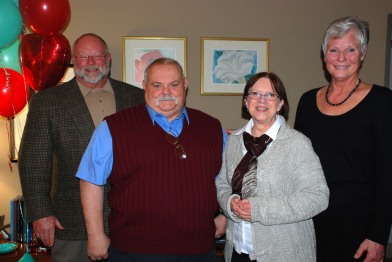 Mark Bittman Month
I’ve always had a bit of a No New Year’s Resolutions policy.  For one thing, everybody’s doing it – something I tend to resist.  Secondly, it seems to run counter to my “denial is our friend” mantra.  However, on January One this year, in a moment of let’s just call it weakness, I decided on two resolutions: 1) blog more, and 2) January is Mark Bittman Month.  I also added a couple of New Year’s suggestions, which I may or may not discuss in a later entry.

Rachel and Bret gave me Mark Bittman’s The Food Matters Cookbook for Christmas, so, in keeping with resolution two, last night I made a dinner of Curried Chickpeas and Cauliflower from the book and Chicken and Roasted Squash with Kale.  The latter recipe illustrates one of the things I love about Mark’s recipes.  Sometimes they’re more suggestions for combinations of ingredients than actual recipes.  Both dishes were delicious.  (I’d say, “amazing,” but am trying to not overuse that descriptor.)

Mark’s cookbook includes a panegyric to the pot of beans, and so far I’ve cooked a pot of mixed beans for traditional bean soup and a pot of chick peas.  I used some of the chick peas in the recipe mentioned above and plan to use more of them later this week in his recipe for Chickpea Tagine with Chicken and Bulgur from the book.  It sounds amaz…, er, yummy!

A Little Bit of Everything

Here to share photos, thoughts simple and profound, and to chat about books, food, and the state of the world.
Follow sillisoup on WordPress.com

When imaging and pixels merge we make art

A teacher in search of ways to save ourselves, our classrooms, and the world

Blog about Canada and travels/ Blog o Kanadzie i podróżach

Be nice. Be green. Be kitschig.